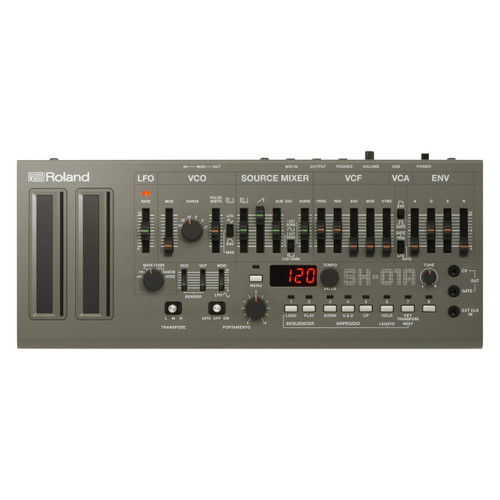 FOUR TIMES THE SOUNDS IN A FRACTION OF THE SIZE The SH-01A is a meticulous reproduction of the iconic Roland SH-101, one of the most popular classic synthesizers of all time. Our Analog Circuit Behavior (ACB) technology reproduces the SH-101’s legendary sounds by faithfully recreating the actual behavior of the original analog circuits, right down to the fine details and odd quirks that have endeared the synth to musicians and producers for decades. The SH-01A builds on the great sounds and creative immediacy of the original, now in the popular Roland Boutique format—offering exciting new polyphonic capabilities, inspiring new performance features, and a level of authenticity that could only come from Roland. Sounds of the classic SH-101 synthesizer via ACB tech, including bass, lead, noise, and sound effects New Unison, Chord, and four-voice Polyphonic modes expand on the original’s iconic sound palette Built-in sequencer with 64 patterns available to save and recall Easy performance arpeggiator with three playback modes, note hold, and three-way transpose switch CV/Gate output for controlling modular or vintage gear Multiple sync options including internal and external MIDI, MIDI via USB, LFO clock, and trigger input 64 writeable preset patches for increased performance capabilities Selectable advanced LFO with new waveforms and extended range of clock rate Sends and receives MIDI control change messages via traditional MIDI jacks or USB High-quality construction with metal front panel Highly portable for mobile music making Battery-operated (4 x AA) or USB powered Compatible with the K-25m Keyboard Unit and other optional Roland Boutique accessories Available in limited-edition red and blue colors like the original SH-101 Beauty Through Simplicity The now-legendary SH-101 was a seemingly simple monophonic synthesizer launched in 1982. Unlike more complex synthesizers available at the time, the SH-101 quickly became popular for its characteristic tone and simple one-VCO → one-VCF → one-VCA → one-LFO structure. A legion of artists found it quick to program and adept at bright edgy tones and exciting sound effects. Its bass sounds are universally revered, and somehow any sound it produces always just fits perfectly in a mix. More than thirty years later, the SH-101’s hallmark sounds continue to be sought after by electronic artists the world over. It’s a staple of vintage synth collectors and well-equipped, world-class studios, and now returns as the inspiration for the SH-01A. A is for Authentic Original SH-101s are becoming increasingly rare, making them ever more expensive on the used market. Because of this, many have resorted to sample packs, hardware knockoffs, or software plug-ins loosely inspired by the SH-101. The SH-01A accurately recreates what makes the original so special, and the interface, while more compact, is 100% authentic. The sound is vibrant and alive thanks to our proprietary Analog Circuit Behavior (ACB) technology. We use ACB to carefully recreate all the details and quirks of the original hardware by modeling each analog circuit, right down to the component level. Face-to-face consultation with the original designers and relentless research beyond the original schematics provides meticulously recreated oscillator, filter, and envelope behavior—a perfect foundation to build upon for a new generation of “101” fans. An Inspired, Iconic Sequencer Revisited One of the most creative features of the original SH-101 was its 100-note step sequencer. Press Load, add sequential notes with legato and rests, and press Play. Easy. Designed to inspire through simplicity, the SH-1