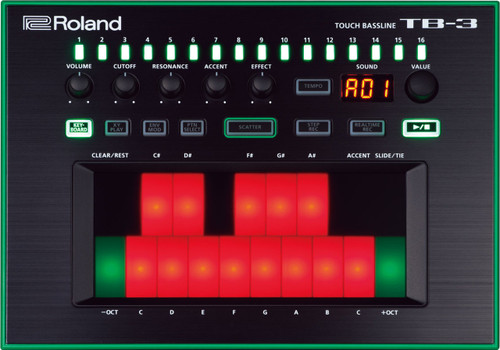 THE MAGIC OF THE TB-303 WITH NEW SOUNDS AND MODERN, PERFORMANCE-READY FEATURES Based on the wildly influential TB-303, the new TB-3 Touch Bassline is a performance-ready bass synthesizer with authentic sound and intuitive controls engineered to play. The TB-3 contains the unmistakable character of its predecessor, wrapped in a modern package with a pressure-sensitive touch pad that makes both playing and programming a total joy. CAPTURING THE ORIGINAL Meticulously crafted from a pristine TB-303 unit, original spec sheets, and archival data Roland’s ACB technology models each component and every aspect of the original TB-303 sound Faithful recreation of the original saw and square oscillator waveforms Attack, slide, tie, and other elements that characterize the TB-303 have been fully reproduced, including how they interact with each other Authentic filter behavior with smooth response and classic sound TB EVOLVED Pressure-sensitive touch pad 134 captivating sounds, including the original TB-303 tones and new four-oscillator, effects-processed basses, leads, and sound effects Dedicated Tempo control with shuffle and tap tempo functions Control built-in effects with smooth, responsive knobs 7-segment, 3-character LED display Seamless switching between pattern creation and performance 16-step indicator lights to aid in pattern creation Pattern support for up to 32 steps Easy access to shuffle control for bass lines that groove Enter steps manually or record in real time on the touch pad Change step count during playback to alter the length of phrases Random pattern generation and pattern modification Pattern copy function THE LINEAGE Nobody could have anticipated what would happen to the world of dance music when inventive musicians on both sides of the Atlantic embraced Roland’s now-legendary TB-303. Since the 1980s, it’s been a staple of electronic music—it is the defining sound of acid house, and has since been the marquee instrument on an array of groundbreaking electronic dance tracks. It’s not only been used to write songs, it’s had songs written about it. In fact, the release of the original TB-303 has been heralded as one of the key events in the history of dance music. Not bad for a little silver box. THE SOUND Launched in 1981, the TB-303 continues to be an indispensable bass synth for dance music. In developing the TB-3, we’ve meticulously analyzed the circuitry of the original TB-303 piece by piece, right down to the individual circuit behavior. Using Analog Circuit Behavior (ACB) technology, we’ve fully reproduced the TB-303’s sawtooth and square wave oscillators, as well as the -18dB per octave ladder low-pass filter used in the original, capturing that unmistakable cutoff and resonance character. In addition to the faithful reproduction of classic TB tones, the TB-3 is packed with new sounds that live and breathe. Bubbling synth basses, hard distortion basses, trippy delay sounds, and drippy effects—they’re all here, and then some. THE FEEL A TB-303 bass part not only sounds unique—it has its own trademark feel as well. The TB pulses. It drives. It bubbles and it percolates. That’s why we’ve worked so hard to faithfully reproduce the accent, slide, and step sequencer behavior of the original unit. But our vision went beyond simple reproduction. The truth is, the step entry on the original TB-303 was difficult to use, the keyboard was difficult to play, and special maneuvers were required for the shuffle functions. So we experimented with a variety of prototypes in our quest to create the optimal TB interface. TOUCH PAD