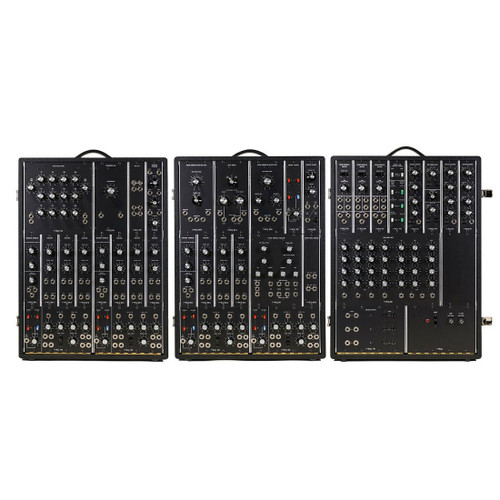 All modules are securely mounted into three solid wood, tolex-wrapped cabinets at the Moog Factory in Asheville, NC.

Only 40 Synthesizer IIIp will be produced and sold worldwide.

Each circuit board is hand-stuffed and hand-soldered by a Moog Employee-Owner.

From the first component to the last module, each Moog Modular system is handcrafted with love.

Throughout the 1960s, Dr. Robert Moog collaborated with over 100 composers of electroacoustic music to create the synthesizer concept, born of thousands of design decisions and countless conversations. At the time, the available method of producing electronic music was the “classical studio,” a makeshift production environment cobbled together from individual electronic sound-generators such as surplus telecommunications devices, radio equipment, and early tape machines. Moog and the musicians he worked with streamlined this classical studio technique into a system of standardized sound modules.

In 1965, Bob Moog began taking orders for individual modules and customized modular systems. By 1967, he and a team of ten skilled technicians were hand-building production models in an unassuming brick storefront in Trumansburg, NY. The cutting-edge musical instruments that they called “synthesizers” signaled electronic music’s maturation from an awkward and shy intruder in the realm of music to a dynamic and significant medium of musical expression.

Each synthesizer took weeks of patient, steady crafting to complete, but the payoff would be rich -- a tool that would change the landscape of music.

The world got turned on to the idea of the synthesizer -- and electronic music -- through the visionary works of experimental musicians like Wendy Carlos and Isao Tomita. Sonic masterpieces like Switched On Bach and Snowflakes Are Dancing were made possible by the early modular Moog Synthesizers. These original modular systems designed by Bob Moog are inimitable in sonic character and remain highly coveted for their limitless reconfigurability and vibrantly organic musicality.

Fifty years later, we are proud to announce the return of the Moog Synthesizer IIIp to production for a very limited time.

Every Synthesizer IIIp will be built using all-original documentation, art, and circuit board files. Each instrument features thirty-seven hand-stuffed, hand-soldered modules, including ten 901-Series audio oscillators, the 984 Matrix Mixer, and the 905 Spring Reverb. All modules are securely mounted into three solid wood, tolex-wrapped cabinets at the Moog Factory in Asheville, NC.