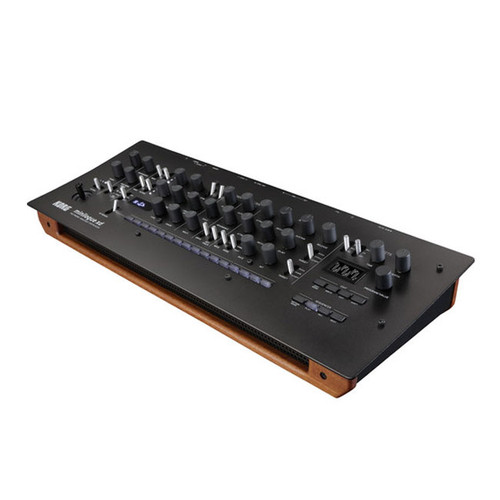 The four-voice Korg minilogue xd module is Korg's latest polyphonic analog synthesizer that builds upon the success of the minilogue xd, Monologue, and Prologue synthesizers and harnesses the most sought after features of each, culminating in one of the most advanced instruments available. By combining multivoice, multitimbre, and Multi Engine technology, the minilogue xd module utilizes a best of feature set from each minilogue product with additional features including a digital multi-engine, digital effects, a feature-rich sequencer, and microtuning, which further expands the possibilities for sound design and performance.

In this latest addition, Korg implemented polychain support, allowing two minilogue xd series (keyboard or desktop module) units to connect for poly assignment settings. Specify one unit as the master and the other as the slave, and they will play as an eight-voice polyphonic synthesizer, supporting a variety of uses, such as a voice-expansion module for the minilogue xd, a sound module for a DAW-based production system, and more.

The synthesizer's architecture uses two VCOs + multi-engine (VCO3), a 12 dB/octave filter, two envelopes, a VCA, and an LFO. The multi-engine is equipped with three sound generation devices including a noise generator, a variable phase modulation (VMP/FM) generator, and a user oscillator, which allows you to load your own oscillator programs including custom wavetables via a free editor/librarian. The two-pole, low-pass filter with enhanced sharpness adds drive with powerful distortion, as well as a key-track switch. Its sound covers almost every sonic possibility: fat basses, powerful leads, and the lush pads that you expect from a polyphonic synthesizer.

Additional features include four voice modes, a powerful arpeggiator, a 16-step polyphonic sequencer with step, real-time, and motion recording, and a 32-bit digital effects engine, which provides three simultaneous effects including modulation, reverb, and delay. The desktop module has no keyboard, but instead offers a keyboard mode, which allows you to use the 16 buttons to operate as a keyboard with more than an octave, providing a convenient way to check the sound. The assignable joystick provides control over different assignable parameter for each program for inspired performances, while the OLED oscilloscope provides visual feedback of parameter changes in real-time. The Korg Minilogue XD Desktop Module includes free software and ships with a power adapter.